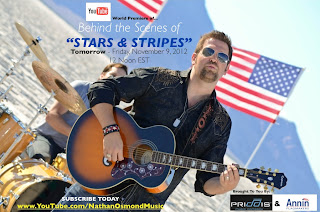 The video features interviews with Nathan and his executive producer, Rick Priddis of Priddis Music Company. It also features interviews with the director, Brandon Beckham and the featured military couple from the video; Robert & Krista Iverson. Nathan shares a beautiful and heartfelt story from his father’s life in the Army.  The video is a great tribute to the many men and women who have served this nation valiantly.

BIG NEWS: Great American Country (GAC) network has notified Nathan’s management that they will be premiering the music video this Sunday at 7:44am EST in honor of the troops. They were very moved by Nathan’s tribute to the troops and their families. Nathan was also just made the National Spokesperson for American Fallen Warrior Memorial Foundation (AFWMF) and just co-wrote them a theme song with Marwenna Diame called, “21 Guns (Some Give All)”. Nathan will be traveling back to New York City today to be in a BIG Veteran’s Day Parade on Sunday. He will be singing the new theme song as well as his #1 hit, “Stars & Stripes.” He then flies back to Utah on Monday just in time to sing with Collin Raye at the Utah State Capitol Building on Veteran’s Day.

Nathan dedicates “Stars & Stripes” to all the troops and their families to let them know that we still care and that we will never forget the many sacrifices that have been made in our behalf. Nathan is most proud that his video includes no actors – they are ALL active-duty military personnel and their families. Nathan even worked with top military officials to obtain the rights of using actual combat footage in his video. Nathan asks that each of you share this video with all of your friends. He wants as many of our military to hear this song and see this video.

Special thanks to executive producer, Rick Priddis and Priddis Music Company and to Annin Flagmakers – The official sponsor of “Stars & Stripes.”