Osmond was recently approached by Tonya Evans, president of AFWMF and was made the national spokesperson for the foundation. He gladly accepted the position and asked if he could write a theme song for the organization. Evans was ecstatic at Osmond’s offer. He co-wrote 21 Guns with hit-songwriter, Marwenna Diame of Scotland. She also co-wrote Stars & Stripes with Osmond.

The video was released on YouTube on Veteran’s Day 2012 and features real troops and combat footage. Osmond performed it in the New York City Veteran’s Day Parade and debuted it on stage with Country superstar, Collin Raye during a star-studded ceremony at the Utah State Capitol on Veterans Day. http://www.ksl.com/?nid=148&sid=22944166 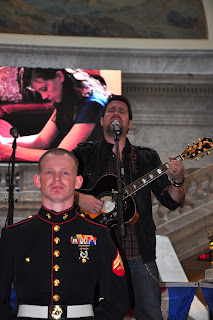 AFWMF is a non-profit organization, with the goal of building a Memorial to honor our Fallen Warriors from the Gulf War to present date. The secondary goal of  AFWMF is educating America’s youth about the sacrifices being made for our freedoms. The goals of the AFWMF will be accomplished with the help of Patriotic Americans joining forces to make sure this memorial is completed and that our Fallen Warriors have a suitable and sacred place of remembrance and honor. More info at http://www.AFWMF.org or http://www.GoldStarWall.org