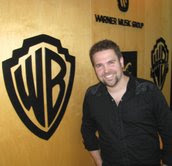 Music City USA was officially introduced to Country Music’s newest face, Nathan Osmond. Nathan spent three days meeting with record labels, televisions studios and even Vanderbilt’s Children’s Hospital. Here’s how it went down:
(DAY 1)
Nathan and manager, Tom Roach started day one off by meeting with Ann Wilson Music Group (AWMG) where they met with Ann Wilson and Margie Hunt regarding Nathan’s career. They received some great tips as to what is currently going on on Music Row and how to best present Nathan’s music to the labels. It was a very informative meeting and may even lead to a writing/publishing deal for Nathan.
Next, they visited Gillie Crowder at Live Nation who was the one who personally walked Nathan’s album into Show Dog Records (Toby Keith’s Label). Nathan thanked her for all her support and made a new friend with the “English Queen of Country Music.”
Sony Records was the next meeting for Nathan where he met with Jessica Dock who listened to about four of Nathan’s tracks. She really liked his sound and is now sharing it with the rest of her people at the label. It was a great meeting.
Nathan and management then met with Larry Pareigis, president and CEO of Nine North Records at the Edgewood Cafe. Larry was a BIG guy who was wearing a Steeler’s jersey. He loves Nathan’s song “SWEET”, especially the lyric, “Legs as long as a night in jail…” He said his wife can’t stop listening to Nathan’s album. Nathan’s friend’s, Due West are on Larry’s label.
The final meeting that day was with Cris Lacy at Warner Brother’s Records. Cris also listened to several of Nathan’s tracks and told Nathan that she loved the songs he picked for his album. She is enjoying a much needed trip in Mexico right now, but promises to follow-up with Nathan’s management team as soon as she returns.

Nathan started day two off on the Tennessee Mornings Show with the one and only Charlie Chase and Kelly Sutton. They loved Nathan and were impressed with how “techy” he was on the internet. Nathan sang his single, “SWEET” on the show. Half-way through the first verse, the music cut out. Nathan kept on singing a capella till the music started over. He handled it like a pro and sang the song over. The interview went great and Nathan was invited to come back on the show anytime.
Then it was off to meet with Curb Records. Nathan and his brothers were on Curb Records as the Osmond Boys/Second Generation. Nathan met with John Ozier (A&R Director for Curb). John said that he was surprised at how Country Nathan sounded. He listened to about 4 of Nathan’s songs. He said that Country music has become so POP sounding that he said they are looking for someone that can help pull Country back a little bit more mainstream. Beck Judd of Curb Records then treated Nathan and Tom to lunch. She hooked them up with tons of CDs on the way out the door. Nathan felt very good about the meeting.
Nathan and his manager Tom then headed back to Music Row to meet with Allison at Big Machine Records (Taylor Swift’s label). Allison was very hip and knew a lot of Nathan’s friends in town. She listened to “SWEET” and recognized a lot of the writers on Nathan’s album. She was very impressed with the songs Nathan selected for his project and complimented him by saying that he was a very good A&R person. She says that’s rare to find in an artist. She is sharing Nathan’s press kit and CD with Scott Borchetta who helped to get Taylor Swift launched.
Nathan then drove to Show Dog Records offices (Toby Keith’s label) to meet with George Nunes. George told Nathan that he will get a deal based on what he listened to on Nathan’s album. He said at their label, only Toby decides if you’re signed. They had listened to Nathan’s album several times and finally took the CD to Toby’s home to give it to him. They told him that they really like Nathan’s album. They even complimented Nathan’s apparel saying it was totally something Toby would be wearing. They were very excited to finally meet Nathan in person.
Nathan’s Facebook friend, Will Tennyson emailed Nathan the night before when he heard he was in town and wanted to meet with him. Will just happens to work with CMA. He gave Nathan a application to be part of CMA and also a very cool hat. He offered to help Nathan in any way that he can and has been very proactive in opening up new doors for Nathan.
Nathan and Tom had dinner that night at Pei Wei with his producer, Dean Sams (Lonestar). Dean and Nathan eat their anytime Nathan is in town. After hearing about who Nathan had met with, Dean said, “You’ve gotten more done in two days than most artists get done in a Summer!” They then sat in Dean’s Escalade and listened to some of Lonestar’s NEW tunes that aren’t even released yet. It was a great reunion and Dean is very excited to help Nathan’s career any way he can.
Nathan got a call from a song writer friend (Jason Deere) who invited them to come to the Wild Horse Saloon to hang with Nathan’s friends, Due West. The show was awesome and Nathan got to even hang out with Restless Heart backstage.
(DAY 3)
Day three started at Monre Carell Jr. Children’s Hospital at Vanderbilt. Nathan met with the staff and took pictures. He then sang to the kids and got them dancing and clapping to the music. He signed pictures for the kids and said good-bye. They want Nathan to come back soon for some more events they are planning.
Nathan took Tom out to the Cheesecake Factory, one of Nathan’s favorite restaurants. They discussed the best ways to follow-up with these labels to help keep the momentum going.
Margie Hunt was able to lock in a meeting with the folks over at GAC where about 9 executives sat down around the board room table. They each got a copy of Nathan’s album and asked him lots of questions. Upon leaving, John, (one of the main people in the meeting) leaned over to Tom and said, “I’ve got some good ideas. I’ll get back to you soon.” It was a GREAT meeting. They even offered to show us around the studio.
Nathan and Tom rushed over to meet with Lyric Street Records/Carolwood Records (Rascal Flatts’ label) to meet with Kirk Boyer. Kirk gave Nathan some good feedback on his album. It was a very informative meeting and Nathan created yet another friend in Nashville.
Tom rushed Nathan to the airport to catch his flight back to Utah. It was a BIG trip, but Nathan Osmond definitely created some major waves. They now know who he is up on Music Row and they know that they haven’t seen the end of him. Nathan has plans to be back in Nashville on a regular basis as it is becoming like a second home.
Be sure to stay tuned for further updates on Nathan’s Nashville Experience. Get your autographed CD at Nathan’s official website TODAY http://www.NathanOsmond.com or Download it there as well.