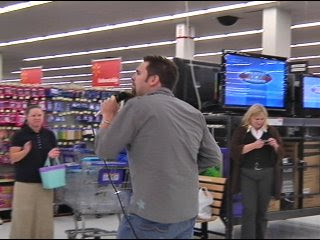 Wal-Mart shoppers in Bozeman were treated to a surprise Wednesday as country musician Nathan Osmond performed in the store.

Osmond, the son of entertainer Alan Osmond (and nephew of famed 70s duo Donny & Marie Osmond), has been touring the state the last few days, stopping in Great Falls, Helena, and Butte before making his way to Bozeman.

He’s thanking Wal-Mart for its support of the Children’s Miracle Network.

“My grandma Osmond is the one that had the dream, the vision back 27 years ago around our kitchen table, ‘Let’s do something that helps all these kids’. And Joe Lake was there, and Shannon, and they put something together. Thanks to these guys, since 1987 Wal-Mart has been a sponsor of Children’s Miracle Network,” Osmond said.

Osmond’s next stop is in Billings before he returns home on Thursday.