Warren Elliott flew hundreds of combat missions in Vietnam; he understands the difficulties of returning home from war.
He didn’t fully understand that today’s wounded warriors are much different from those who returned from Vietnam until he began volunteering with a military ministry at Walter Reed National Military Medical Center.
“I realized they weren’t coming home shot up,” he said, “they were coming home blown up.”
Elliott learned that severely wounded service members can spend up to two years in physical recovery. When discharged from the hospital, these men and women face a whole new set of challenges. They must learn skills to gain employment in the civilian sector and acquire homes and vehicles specially adapted for their disabilities. For young wounded warriors with modest incomes, simply creating a sustainable living environment is an enormous feat.
“Our government is doing a great job putting them back together, but it’s not in the business of putting them back on their feet,” Elliott said. “We decided to do something about it.”
Elliott, a managing partner of an international business consulting firm and the man responsible for launching PGA Tour Radio, approached the issue like a businessman. He gathered retired military officers, former clergy and business executives to look at the steps involved in transitioning an injured service member into an independent, contributing member of society.
They discovered that the process can take up to seven years, and an estimated 80 percent of our severely wounded are unable to navigate the process successfully, leaving them at risk for divorce, unemployment and homelessness. The group formed a nonprofit organization, called Wounded in Action Family Foundation, and decided that no one would be put on payroll.
WIAFF’s first client, Army Sgt. David J. Battle, lost both legs and one arm in an IED explosion at age 23. His injuries required more than 100 surgeries. Before WIAFF stepped in, the future looked uncertain for Battle, his wife, and their five children. The family now lives in a wheel-chair adapted home. Battle is a community college student; his wife is newly employed.
Elliott notes that regaining self-worth is a critical step in the healing process. “These are extremely skilled people. They’re driven to get back to where they were. Part of this is about not leaving anybody behind.”
Rising country star Nathan Osmond (yes, that Osmond) partnered with WIAFF and is helping to raise funds for the organization. The reintegration process is expensive.
“It takes about a quarter of a million dollars per soldier to get them to where they need to be,” Osmond said.
Osmond is the executive producer of the newly released Homeward Bound Heroes CD and concert series of the same name, which kicked off in Maryland last week and is tentatively scheduled to hit Los Angeles this fall. The CD includes Osmond’s hit “Stars and Stripes” as well as songs from Lonestar, Sarah Darling, Moi Navarro, Crossin Dixon, and more. Sales from the concert and CD go toward the 900 identified wounded warriors that WIAFF plans to help.
Osmond and Elliott see eye-to-eye on the ultimate vision of WIAFF.
“Our goal is to be a saving grace, to jump in there and offer hope, let them know they aren’t alone in this endeavor,” Osmond said. “Our wounded deserve our utmost respect, but especially our support.” 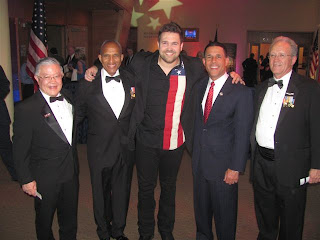