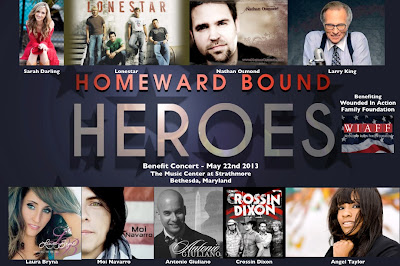 VIENNA, VA (March 14, 2013) — Nathan Osmond, Lonestar and legendary CNN broadcaster Larry King headline a star-studded tribute to U.S. Troops at the first ‘Homeward Bound Heroes’ concert event, set for May 22, at the Music Center at Strathmore in Bethesda, MD. Executive Producer Nathan Osmond commissioned Christian Serge to Direct and co-produce the live event.
As major wars in Iraq and Afghanistan wind down, U.S. military personnel are coming home by the thousands, many of them injured from the battlefields they fought on for more than a decade. The Wounded in Action Family Foundation creates the opportunity for Wounded In Action families to successfully transition from a military hospital environment back into civilian society. ‘Homeward Bound Heroes’ will bring together top entertainers as they honor the men and women of our armed forces. Among the notable stars scheduled to perform are Nathan Osmond (of the Osmond Family), who will debut his new CD – called ‘Homeward Bound Heroes’ – that night.
Other stars slated to perform include iconic country rockers Lonestar, singers Sarah Darling, Moi Navarro, Angel Taylor from NBC’s The Voice, and Maryland’s own rising female country star, Laura Bryna.
U.S. Army Choir solo specialist MSGT Antonio Giuliano will sing the national anthem and other famous guests will
be part of a music video montage that pays tribute to the troops. “WIAFF salutes all our wounded warrior families,” said Warren Elliott, CEO and Co-Founder. “Our goal is to make sure they are given every opportunity to return home and experience the American Dream for sacrificing so much for our country.”
Studies have shown that up to 80 percent of families making the transition from hospital environment to civilian life are unable to successfully accomplish this complex and intensive set of tasks. The result is often unemployment, a poor future outlook and significant family stress, leading to a breakdown of the family structure.
WIAFF was created to provide the much-needed support these young men and women need as they make that transition. The organization is not about charity or lifetime aid. Rather, it’s immediate mission is to help these affected families become self-sufficient by connecting them to local businesses and communities and the resources they can provide to get these wounded warriors back on their collective feet.
Wounded in Action Family Foundation is a registered 501 (c)(3) non-profit organization. It was formed in 2008 as an outgrowth of “Operation Kindness Ministry” of the McLean Bible Church in McLean, Virginia.
Press Contact:
Howard Ruben PR hruben@howardruben.com 818.823.1971
Stefanie Williamson swilliamson@howardruben.com 631.754.0460